Living in the country offers new experiences every day and you never know what a knock on the door leads to. 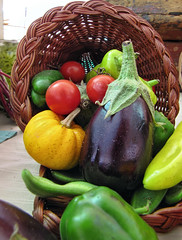 Yesterday morning I heard that knock and two Amish gentlemen were standing on the porch. Being the time of year it was; I had a pretty good idea what they wanted, hickory wood.

Our land is covered with hickory and it’s what the Amish like best to make their bentwood rockers. January and February are the best times to harvest the branches.

The hickory wood bends and shapes better when there is no sap in the wood. It also will not split as easily when nailed. Around here the Amish use white oak for the seats, back and rockers of the bentwood furniture, but the frame, chair and added details are made from branches of hickory. It’s chosen for the strength and ease of bending.

Several years ago the Amish heard we had a lot of Hickory on the land. With land being cleared for building it’s becoming harder for the Amish and bentwood chair builders to find the smaller trees that work best.

They asked us if we would let them trim the smaller trees for backs and decorative trim for bentwood furniture. In return we would get one rocking chair and money. We didn’t have a bentwood rocker so we agreed to the deal. And we do have a large amount of Hickory trees on the land. 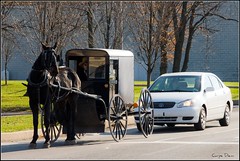 It was fun to watch the Amish gather the hickory. They arrived each morning in two Amish buggies and would park over by the barn. The horses would be tied in the barn during the day.

The Amish collected the hickory in piles then tied it in 2-foot bundles. Some of the branches would be 10 foot long but most were about 6 foot long. They gathered about 50 bundles and stored them on the landing just off the road but about 15 foot higher than the road.  All told, they spent five days collecting, cutting and bundling hickory.

The day they decided they were done they brought an old wooden 20-foot sleigh that two draft horses would pull. Watching them harness the horses and attach the antique sleigh was an amazing site. I have never seen such a large sleigh. I asked the one Amish man how old the sleigh was and he wasn’t sure. His family remembers it being used for generations. It was well over one hundred fifty years old and in great shape.

We had about three foot of snow at this time and using a sleigh was the most practical way to get the bundles off the hill and down the dirt road to the main highway. The sleigh was loaded on the landing brought to the road, then pulled quickly across the highway and down to the barn. While the truck was being loaded the draft horses were fed and watered and then loaded into a trailer for a safer trip home.

It’s rather dangerous for the Amish buggies to travel some of the roads in this area because of the high traffic and our road is a perfect example of one of those high traffic roads. The buggies are smaller and can take the back roads home, so the truck with the draft horses headed south on the highway and the buggies headed north to connect with a dirt road ½ mile away with less traffic.

Our bentwood rocker was delivered two weeks later. It was signed by the maker, numbered and dated. We call it the ahhh chair. After a long day you sit in the chair and this is your first response, ahhh. It’s an extremely comfortable chair.

Since that first time, the Amish have cut hickory four times and our rocker collection grows. We also have a bentwood love seat. They will again be cutting hickory off the land and should be here in a few days to get started. I hope they bring the sleigh again.

The Amish have several communities in this area and their culture adds to the uniqueness of this area.