I live in an area where the farmers have an unwritten rule where they feel they can do as they please; farming comes first! I was brought up that you treat people as you want to be treated. These two thoughts often clash. But once in a while they work out to your advantage. 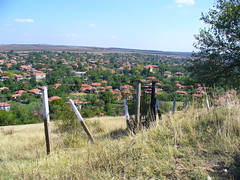 One day I was walking on the hill and the farmer that lives beside me had been cleaning his field and old shed. His solution to the problem was to dump it on my property. I had two six foot stacks of old fencing posts that he had removed, rolled up barbwire and some old pails and wooden boxes. At first I was livid. Then I looked at the pile.

I had recently saw barbwire fence wreaths selling for $20 to $50 dollars apiece and the old fence posts would make great garden art. I could turn them into totem poles, birdhouse poles, or even decorative birdhouses. There were endless possibilities for the posts.

I took a wagon up onto the hill and loaded up one of the piles. I had an art show I was entering with a craft section and I made barbwire wreathes for that. They sold as fast as I made them but they were rather tricky to make.

The barbwire was old and very rusty. It had a lot of the old barbs on it and I had to wear two pairs of gloves to wrap the wire and safety glasses for the flying rust coming off the strands. I had seen wreaths made that just wrapped the barbwire then wired it together. I started out with a wrapped base but wove the last several layers around the wreath. This gave it a rich thick look and was great for adding natural objects.

I still have a nice stash of old barbwire for projects and a few fence posts left.

I saw my neighbor just after he dumped the piles on the property and asked why he did so. His response was, “We have always done that on this hill. It’s the farmers way.”

So I nicely asked if I could dump my stuff on his land and his response was, “Well you don’t farm the land so it doesn’t count.”

I just smiled and said, I may not farm the land but I do have two sheep and six rabbits so if you dump items on my land without asking first I will return the favor. I haven’t found any piles on my land since.