February 2…. A day like most other days except in my neck of the woods. The furry Groundhog affectionately named Punxsutawney Phil, fellow native Pennsylvanian located to the south of me, will take on groundhog Dunkirk Dave, 30 minutes north of me. 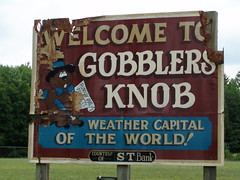 No their battle will not be a head on confrontation. It will be held individually in front of thousands of people and cameras in their own hometown.  Each groundhog will decide through tradition and ceremony the right prediction to the end of winter and beginning of spring.

Legend says that if the groundhog sees his shadow and is scared back into his hole, we will have six more weeks of winter. If he does not see his shadow, spring is on the way in 1-½ months.

The ceremony and planning for this event starts months in advance and anyone who wishes to attend must book a hotel room the year before. Neither town takes this holiday lightly.

Punxsutawney Phil is probably the better known of the two and has a more precise record for predicting the end of winter. He has been predicting the end of winter for over 120 years. I had relative who lived in this town so I am well aware of the tradition of this holiday. The event in Punxsutawney starts Feb 1 and last through Feb.3. Each day is packed with activities and events.

For those who never have been to Punxsutawney, Pennsylvania you know you have entered a unique town when you drive through. Where else would hotels and breakfast specials be named after groundhogs. There are groundhog statues in parks and furry little rodent faces in windows and on doors. On Saturday Feb. 2 at 7:20 a.m. Punxsutawney Phil will give his prediction for the end of Winter 2008.

There are only two things I think of on Ground hogs day. Will the ground hog see his shadow on February 2 and that means we will have six more weeks of winter? And even with tradition and ceremony how can one day be set aside to honor a rodent that can demolish a row of bean in my garden in twenty minutes?

I don’t know about you other gardeners but the groundhog has been one of my biggest gardening challenges. I did finally win the groundhog challenge, for the time being, but the fear of his return lingers

Final note: Punxsutawney Phil is predicting another six weeks of winter. Dunkirk Dave’s prediction has not been heard yet.