One year I heard about planting in rectangular hay bales and of course I had to give it a try!

The reasoning for planting in hay was that it was like a raised garden and you could plant earlier with less work and no digging. The No Dig method is considered to be better for soil structure. 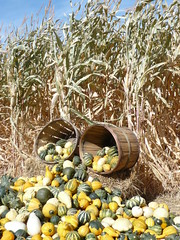 I read that you needed to start with transplants. They suggested wetting the bale down very well a couple of times a day for several days. When you were ready to plant your transplants you would dig a hole in the bale and put in rich potting soil or compost.

So I decided to add a hay bale wall to my garden area and started dragging in hay bales. Of course the neighborhood was watching and wondering what the eccentric gardener was up to this time. I wet the bales down as suggested and added fish emulsion to the areas I knew I would be planting in.

I planted peppers, tomatoes, flowers and beans in the hay bales in different arrangements that were pleasing to the eye. Several bales I stacked creatively and planted ornamental gourds in those in such a way they would trail down the bales. This made a garden art piece that I could add accent pieces to for fun in the garden.

My accent pieces were old farm pieces, crocks and pottery pieces and later: mums and pumpkins.

My garden plants grew well. I think I had one of the larger tomato crops that year. And the gourds looked great cascading down the bales.

At the end of the year the bales were breaking down and I threw them in the compost pile.

I have used bales since, particularly for gourds, I just like the look and focal growing spot I can make using bales.

Another unique ideas I have heard of for hay bale planting is making a moss planter for plants (It’s a great look!) and a growing flowering plant wall.

One suggestion you may want to consider. Hay brings in more weeds. You will wanter older bales that have brokern down a little or go with straw bales. The straw bales do not have seeds.