The humble origins of the garden hammock

The hammock is believed to have been conceived in South America over 900 years ago. 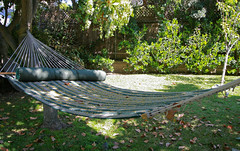 Even though there is no hard evidence many believe that the first hammocks were made using the bark of the hamak tree and this is how the hammock was named.

As soon as Christopher Columbus landed on the Bahamas he could see the versatility of the hammock and promptly brought the idea back to Spain where it went through some refinements. Like swapping the hamak bark for sisal fibers before it spread throughout Europe.

The main reason hammocks became popular initially in South America is because they are suspended above the floor. This in effect kept the occupant away from insect’s spiders and snakes it also offered dry alternative to sleeping on a wet floor.

The hammock is we know it today really came to prominence in the 16th century when an English navy admiral realized its potential for use in the cramped conditions of the battle ships. Now more people could sleep more comfortably in a smaller space than before.

These crew members became so accustomed to sleeping in a hammock that many insisted on taking them whenever they were on leave, convinced that they would be unable to sleep properly in a normal bed.

Hammocks were used by both the navy and military right up to the Second World War which shows just how versatile and durable a hammock is when it stand up to these conditions.

Hammocks still hold many close ties with South America indeed many of the most popular hammocks are named after south and Central American countries.

Brazilian hammocks are made from cotton, they do not use a spreader bar which allows the hammock to wrap in around the person, making them more secure and less likely to fall out when a sleeps.

The Venezuelan hammock also does not use a spreader bar which also makes it ideal to use for sleeping. These hammocks will have a lot more give and will stretch over time.

About the Author:
When Choosing a Garden hammock it is wise to take your time, there are some important questions you will need to ask yourself, do you want one with a spreader bar, where in the garden will you put it , who will use it, will you need to move it around.
Spread the love