Everyone has a path in life. We take twists and turns along our journey often not knowing what lies around the next bend but once we start there is only one way to go, forward. 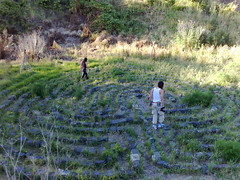 A labyrinth is an ancient symbol dating back over 3000 years. It relates to wholeness and combines the image of a circle and a spiral into what looks like a wandering path. This path represents a journey to our center, who we are, and will return us back into the world in which we live.

Labyrinths are used worldwide. They can be found in parks, medical centers, retreat centers, prisons, back yards, sacred sites and churches. One of the more famous labyrinths is the Chartres labyrinth, which is inlaid at the cathedral in Chartres, France. It is made out of paving stones and dates back to around 1200.

The Chautauqua Institution in Chautauqua New York has a Labyrinth, which was designed by Lisa Moriarty and is the Circle of Peace design. It is located under trees at the north end of Turner Community Center on Rt. 394 making it easily accessible and available to the community and public. The labyrinth can be used year long, unless covered and hidden with snow in the winter.

The current labyrinth was constructed in 2005 through the combined efforts of several Chautauqua labyrinth supporters. Special Studies classes, Chautauquans and the general public use it. It is used as a way to relax, to renew one’s spirit, as a walking path or a place to pray.

Debra Dinnocenzo is the Labyrinth Coordinator and offers an orientation to the labyrinth at 7 p.m. every Tuesday during the season. She feels that it is important that people realize a labyrinth is not a maze. There are no dead ends or tricks to it. It is one path that leads to a center. You use the same path to return, making it unicursal; the path in is also the path out. It is a “walking meditation” that affects each person differently.

Dinnocenzo presents a history of labyrinths at the orientation. She explains the three stages to the walk: “releasing” on the way in, “receiving” in the center and “returning” or taking back out what you received from the experience. “There is no wrong way to use the labyrinth, Dinnocenzo said.

After the talk, questions can be asked and people will then walk the labyrinth.

Dinnocenzo said participating in the labyrinth in a group is a very different experience. You know what you are feeling but you also see other people in various stages of the walk. You are all walking towards one point but because of the way the path is laid out you often look like you are headed in opposite directions. This is much like life, we walk the same paths but each person’s experiences are totally unique.

Dinnocenzo helped chose the location for the labyrinth by Turner Community Center when it was moved from Miller Park. They wanted it under the trees for shade but the location of the trees didn’t seem to quite work. They started working on finding the center of the labyrinth and as they worked out from the center, a tree fell exactly where they felt the alter should be. The alter is a term used for the open area just inside the entrance.

The entrance and alter were emphasized by the tree. It became a unique part of the Chautauqua labyrinth.

Dinnocenzo became interested in labyrinths when she took a special studies class 6 years ago from Harriette Royer called Sacred Circles. She has since walked Labyrinths all over the United States.

For additional information on Labyrinths, visit on the Web: